The Man with Two Gaffers (2006). A version of Carlo Goldoni’s comedy Il servitore di due padroni ( A Servant to Two Masters)
Directed By Barrie Rutter

The play opened at the York Theatre Royal in August 2006, with Barrie Rutter in the title role, and toured until December. Blake’s adaptation moves the setting from Venice to the Yorkshire Dales circa 1850, and recasts the characters as a Bradford mill-owner, a Dales farmer, a pompous vicar, a publican and two star-crossed young couples, with the Grand Canal becoming the Leeds-Liverpool canal, and the slippery servant, Truffaldino, who hails from Bergamot, renamed as Arthur Dodge, a man from Muker.

Here Dodge grumbles about his first boss, immediately before being taken on by a second.

‘Stuff this for a mell-feast. I’ve served some gaffers in my time – hard, bent, angry, bullying, loopier than ten bats in a bell-tower. But at least they paid me. Not this beggar: he’s tighter than a market-wench selling goosegogs. ‘I’ve no money on me,’ he tells me, ‘You’ll be paid when we get to Skipton.’ Well, here we are and I’ve still no shillings in my purse. And cos, I’m skint I’ve not ate owt either. I’m so famished I could gnaw my fingers off and fry ‘em in a skillet of lard.’ 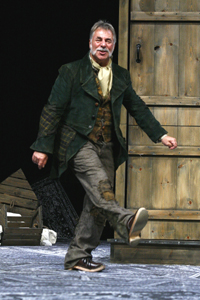